Ver item
JavaScript is disabled for your browser. Some features of this site may not work without it.

Biomechanics of the Primate Skull Base 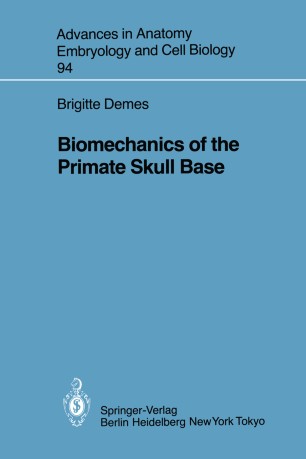 In the search for explanations for differences in the shape of skulls and their phylogenetic development, the morphology of the skull must be seen in connec­ tion with the functions it has to perform. The skull encloses the brain and the sense organs and provides them with physical protection. It also houses the initial parts of the respiratory and digestive systems and together with the jaws constitutes a tool capable of cutting and grinding food. The skull must be able to withstand forces imposed upon it by chewing, by movement of the head, by the weight of the head itself, and by impact loadings. An investigation of the factors influencing the shape of the skull has to take into account not only the above-mentioned functions. The shape also de­ pends on the phylogenetic history 9f the species concerned, which prescribes a basic bauplan and places restrictions on the extent to which functions can influence the design of structural units. The possibilities for variations in skull shape are also limited by ontogenetic development, since the shape of the adult skull is the result of intermediate stages of development, at each of which the skull was a functioning unit. Body size and absolute and relative size of the sense organs in the head also play an important role in determining the shape of the skull.