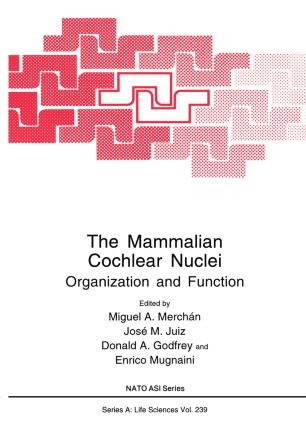 The presence of sophisticated auditory processing in mammals has permitted perhaps the most significant evolutionary development in humans: that of language. An understanding of the neural basis of hearing is thus a starting point for elucidating the mechanisms that are essential to human communication. The cochlear nucleus is the first region of the brain to receive input from the inner ear and is therefore the earliest stage in the central nervous system at which auditory signals are processed for distribution to higher centers. Clarifying its role in the central auditory pathway is crucial to our knowledge of how the brain deals with complex stimuli such as speech, and is also essential for understanding the central effects of peripheral sensorineural hearing loss caused by, for example, aging, ototoxic drugs, and noise. Ambitious new developments to assist people with total sensorineural deafness, including both cochlear and cochleus nuclear implants, require a detailed knowledge of the neural signals received by the brainstem and how these are processed. Recently, many new data have been obtained on the structure and function of the cochlear nucleus utilizing combinations of anatomical, physiological, pharmacological and molecular biological procedures. Approaches such as intracellular dye-filling of physiologically identified neurons, localization of classical neurotransmitters, peptides, receptors and special proteins, or gene expression have opened the door to novel morphofunctional correlations.