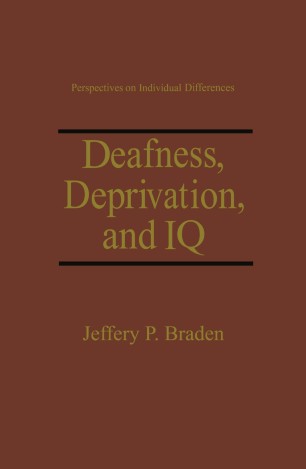 Deafness is a "low incidence" disability and, therefore not studied or understood in the same way as other disabilities. Historically, research in deafness has been conducted by a small group of individuals who communicated mainly with each other. That is not to say that we did not sometimes publish in the mainstream or attempt to communicate outside our small circle. Nonetheless, most research appeared in deafness-related publications where it was not likely to be seen or valued by psychologists. Those researchers did not understand what they could leam from the study of deaf people or how their knowledge of individual differ­ ences and abilites applied to that population. In Deafness, Deprivation, ami /Q, Jeffrey Braden pulls together two often unrelated fields: studies of intelligence and deafness. The book includes the largest single compilation of data describing deaf people's intelligence that exists. Here is a careful, well-documented, and very thorough analysis of virtually ali the research available. Those who have studied human intelligence have long noted that deafness provides a "natural experiment." This book makes evident two contrary results: on the one hand, some research points to the impact deafness has on intelligence; on the other hand, the research supports the fact that deafness has very little, if any, impact on nonverbal measures of intelligence.