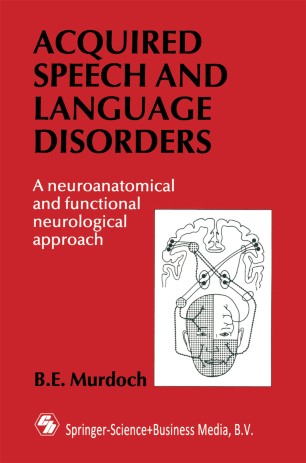 The stimulus for writing this book arose from the author's perception of a lack of available texts which adequately integrate the subjects of neuroanatomy and functional neurology with the practice of speech­ language pathology. This perception was gained from almost two decades of teaching in the areas of neuroanatomy and acquired neuro­ logical speech-language disorders to speech pathology students initially at the South Australian College of Advanced Education and, for the past five years, at the University of Queensland. Although a plethora of excellent texts devoted specifically to each of the subjects of neuroanatomy, neurology and aphasiology have been published, few have attemped to integrate these individual subject areas in such a way as to provide a more clear understanding of the neurological bases of clinically recognized forms of aphasia and motor speech disorders. In writing this text, I have attempted to provide a better balance between neuroanatomy-neurology and. speech-language pathology. Relevant areas of neuroanatomy and neurology are introduced and discussed in the context of specific speech and language disorders. In this way, I have aimed at providing a better link between the relevant neuroanatomical and neurological knowledge on the one hand, and specific neurologically based communication disorders on the other, in order to enhance the reader's understanding of the origins, course and prognosis of these disorders. Of course the writing of any book requires the support and encouragement of other people. This text was no exception.