Multimodality in Language and Speech Systems 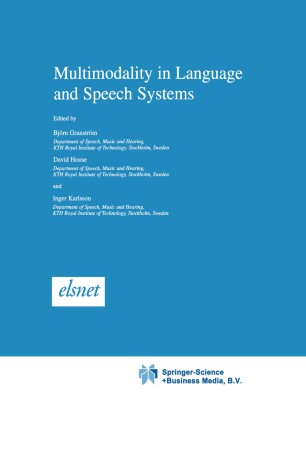 This book is based on contributions to the Seventh European Summer School on Language and Speech Communication that was held at KTH in Stockholm, Sweden, in July of 1999 under the auspices of the European Language and Speech Network (ELSNET). The topic of the summer school was "Multimodality in Language and Speech Systems" (MiLaSS). The issue of multimodality in interpersonal, face-to-face communication has been an important research topic for a number of years. With the increasing sophistication of computer-based interactive systems using language and speech, the topic of multimodal interaction has received renewed interest both in terms of human-human interaction and human-machine interaction. Nine lecturers contri­ buted to the summer school with courses on specialized topics ranging from the technology and science of creating talking faces to human-human communication, which is mediated by computer for the handicapped. Eight of the nine lecturers are represented in this book. The summer school attracted more than 60 participants from Europe, Asia and North America representing not only graduate students but also senior researchers from both academia and industry.